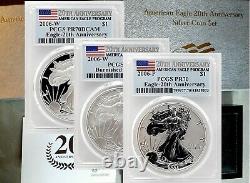 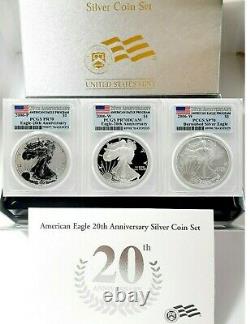 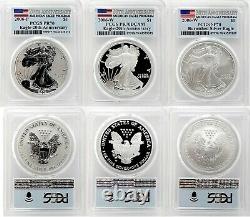 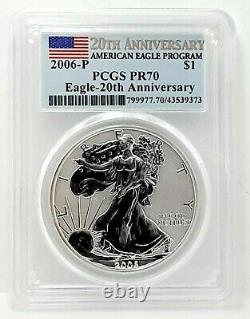 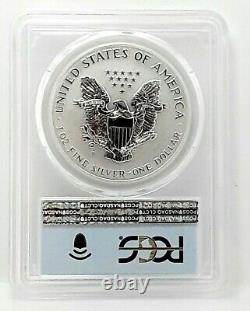 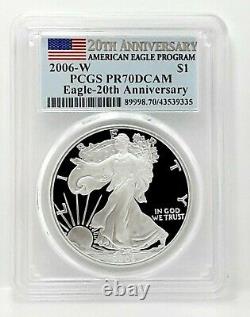 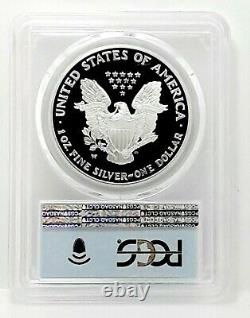 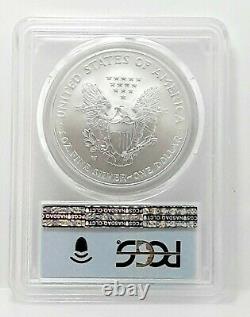 PCGS PR70DCAM / PR70 / SP70. Rare Top Pop 1,042. Perfect Proof 70 Set complete with one each of a Proof, Reverse Proof and Uuncirculated Burnished Silver Eagle. The Set comes with the.

US Mint Packaging to include the Silver Anniversary Outer Sleeve and Box, along with the Black Case and Certificate of Authenticity. The proof and uncirculated coins show a "W" mint mark, and the reverse proof has a "P" mint mark. Be sure to view all of the photos to fully appreciate this gorgeous set with the OGP and COA. You can read more about the History below.

The sets included three Silver Eagle coins, each struck with a different finish. The first coin in the set was struck with a newly introduced uncirculated finish. These coins were struck on specially burnished blanks and carried the "W" mint mark. These coins have been referred to as "collectible uncirculated" versions by the US Mint, although some collectors refer to them as burnished Silver Eagles.

Raised design elements appear mirrored, while background fields are frosted. This represented the first time that the US Mint struck coins in reverse proof.

The coins were produced at the Philadelphia Mint and carry the "P" mint mark. The sets were limited to a maximum authorized mintage of 250,000 sets, with a household ordering limit of ten. A sell out occurred after approximately two and a half months. Secondary market prices rose following the sell out and continued to climb during the ensuing months. This item is in the category "Coins & Paper Money\Bullion\Silver\Coins".